10 Types of Marine Wildlife in Tofino

10 Types of Marine Wildlife in Tofino

Tofino is rife with rich wildlife that’s found only on the West Coast of Vancouver Island. Notorious for its crashing waves, winter storms, surf community, and abundant wildlife, Tofino is one of the world’s most popular destinations to visit, no matter the season.

When you’re out on the water in Tofino, you’re bound to see an abundance of ocean wildlife and whales – especially on our whale watching tours! The Pacific ocean waters are a source of incredible mammals, crustaceans, plants and more. Here are a few of the whales and ocean mammals you’ll see on our tours:

These giants can weigh up to 40 metric tons. Humpback whales are known to migrate up to 16,000km every year, feeding in polar regions and migrating to tropical or warmer waters to breed and birth their young. Typically this is when they’re passing through the Tofino waters – between March and October. 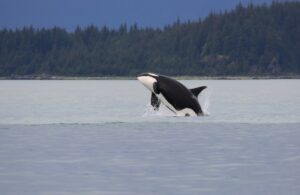 Easily spotted by their black and white markings, Orca whales, or killer whales, are common to the waters of the Pacific Northwest. Orcas are typically the predators of the sea and hunt in packs similar to wolves. Despite their name killer whales, orcas both have never killed a human, nor are they whales! These ‘whales’ are actually part of the dolphin family.

Steller sea lions are the most common sea lion you’ll spot in the waters and on the shores of Vancouver Island. These playful creatures are easily seen by their heads bobbing gently above the shore. If you spot a round head peeking itself out from the waves, you can bet that it’s a Steller sea lion coming to say hello!

We also see California sea lions. Some differences between seals and sea lions: sea lions have ears, whereas seals have holes with eardrums. Sea lions have more developed pectoral fins that allow them to “walk” around on the land, whereas seal only hop on the their bellies.

Typically on our whale watching tours we will see Risso dolphins. These playful creatures can be spotted dancing and frolicking through the waters, oftentimes swimming near the front of boats, putting on a show by splashing or occasionally spinning in the water.

Tidal Pools and Wildlife On The Shore 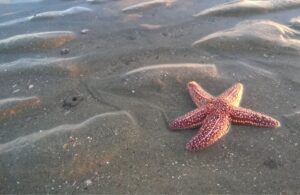 Starfish and sea stars are abundant on the shores of Vancouver Island. These creatures are more closely related to sea urchins than they are to fish. With bristled spines, starfish and sea stars typically have five arms, though larger species can have over a dozen arms!

Many different types of kelp and seaweed are found on the shores of Tofino and Vancouver Island, including the bulbous bull kelp, edible pyropia (or, nori!), or green sea lettuce – a stroll along the shore brings a journey through all of the different seaweeds – including some edible varieties!

Watch your step if you’re barefoot in Tofino! Sea urchins can deliver a small but painful stab to bare feet, and barnacles can also be painful when walking on barefoot! Neither of these creatures are poisonous to humans however. Barnacles are mostly found tightly grasping to any surface (rocks, ships, even on whales!) and sea urchins are generally found in tide pools.

Commonly found on the shores of Tofino are the charming sea anemones. Though these creatures may look magnificent, the tentacles do contain a small amount of poison which are generally harmless to humans – but helps when they’re feeding on small crabs, sea urchins, and other tidal pool wanderers.

On the West coast, crab is an abundant delicacy. Specifically in Tofino, where crabbing and fine dining are abundant – these sea creatures are found everywhere. While our rock crab and dungeness crab are fished by professionals and amateurs alike, to get a good view of these creepy crawly creatures – simply turn over any large rocks on the beach to see them scuttering away! (Note, pick them up at your own risk and avoid their pincers!)

Marine wildlife is one of the sights that Tofino has to offer. The quaint little seaside town has many other sights and trails to explore. To discover Tofino in a never-before-seen-way, book one of our many different Tofino sightseeing adventures – discover wild bears, whale watching, hot springs tours and more!